Signs point towards the German town of Augsburg this weekend as the Vienna Gaels look to get their Gaelic football season back on track following a disappointing outing in round two of the Central/Eastern European Gaelic Football Championship. Here’s Noel Fitzgerald with his account from the sidelines on the Slovak tournament, along with the outlook on this weekend’s action in Augsburg.

Disappointment for the ladies as men topple Munich to make final

An under strength ladies side took to the field in a group with Berlin and the Slovak Shamrocks knowing they were up against it, and the results proved that suspicion, falling to defeats to both, pitting them in the 5th/6th playoff against a tough Prague team. Meanwhile, our men’s team was rolling well in the group stage, pulling up with gas to spare against a combined Zurich/Lazio team and a keen challenge from the Prague Hibernians. Facing a Munich side with whom they dealt with ease in round one of the championship in Rome, they faced a much sterner test here, the Bavarian side bringing more players behind the ball than a Jim McGuinness-coached Panama side. A late Alan ‘Chili’ McKenna point was all that separated the sides, sending them into the final against perennial rivals, Berlin. 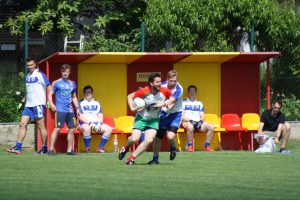 The Vienna Gaelettes started their playoff game in much better fashion than their earlier games, delivering the intensity they had been keeping until the second half in previous games. However, goals win games and a Prague Hibernians three-pointer in the second half was the difference between the sides in the end as our ladies had to settle for sixth place. All eyes then pointed towards the men’s final, as the stand filled up at the TJ Malinovo football ground, where the Vienna Gaels took on Berlin GAA. Despite dominating possession in the first half, the Gaels struggled to work the ball into target man Niall Colleran in the full forward line, and trailed by six points at the break, 1-6 to 0-3. However they roared back into contention in the second half, as Darren Gleeson slid a goal in under the keeper before Peter Mongey smuggled another three pointer in to tie the sides. With Simon Deignan moving out of goals and making an impact in midfield, the game went up and down the field before two late Berlin goals sealed only their second championship round win, and consigned the Gaels to a second successive runners-up spot. 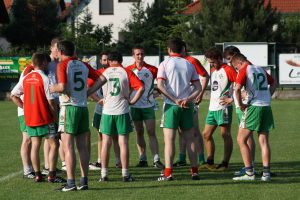 Heading into the next round of the Central/Eastern European Gaelic Football Championship, our men’s team lie one point behind leaders Berlin in second place, while our ladies are in sixth position in a very open ladies championship.

Our men will be joined by some players from Basle GAA, while our ladies will be joined by our friends from S.S. Lazio Calcio Gaelico to complete a strong squad. High honours are not out of reach for either of our sides as both bring lots of experience with them to the Bavarian town. The action kicks off early on Saturday morning, don’t forget to keep in touch by following us on Facebook, Instagram, Twitter and the Vienna Gaels Whatsapp group!

Looking for something to read on this rainy day? C

Get to know @dunjaaa88 in our latest player profil

Check out our new player profile on the Vienna gae

St Patrick's Day is around the corner! Vienn has a

The Vienna Gaels 2020 handball representatives on

Thanks to Gavin King from @nafiannaclg for a great

As the 2020 season rolls into view with Gaelic foo

The pitches are ready and waiting for the 2019 Eur

Are you a student of @maynoothuni and moving to Vi

The many new faces of our ladies Gaelic football t

Our men's Gaelic football panel took some time out